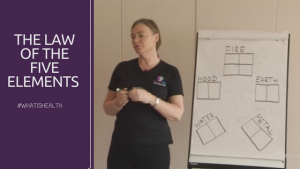 The Law of the 5 Elements – Yin/Yang

This is the vital spark which enlivens us and causes all that we are to function. It is represented by this ancient sign, the Yin and Yang. The Law of the Five Elements is based on oriental understanding of how energy flows in the body and how they are influenced by every aspect of life . Our emotions, colours, season, times and much more. 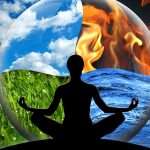 The Law of the Five Elements is rich in symbolism. It contains many ways of looking at our energies and our lives. It is a left/right brain challenge to think in terms of amorphous energies without shape or form, yet these same energies obey strict laws.

This ancient symbol represents energy as it is present in life. In a sense there is no such thing as always and never, and something and nothing. Where we think there is nothing, there is often something, we just do not know how to observe it or measure it, so we say is it not there.

The light part represents the YANG energy, which traditionally is the MALE energy, but it is also LIGHT, and the SUN, it is positive, it is SOUTH, HOT and EXTERNAL. The dark part of the symbol represents the yin energy , which is traditionally FEMALE energy, but is is also DARK, and the MOON, and NEGATIVE (in the electrical sense, not the emotional sense), it is NORTH, COLD and INTERNAL.

Active/passive, Strong/Gentle, Hot/Cold are not judgmental in any way, only expressions of Yin-ness or Yang-ness. And observe there is a spot of light in the dark part, indicating that there is nothing that is all or nothing. There is no absoluteness.Our left brains, trained thoroughly in fallacies that there are, find this hard to believe.

Even thing we thought were stable, like the atom, proves to be much more variable than we once thought. It contains particles, and non particles that we cannot see but that we know they are there. 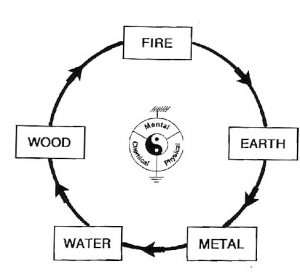 The M.C.P.E logo in the middle represents the fact we are in the middle of a “world” of elemental energy in which we live and have our being, our verb to describe continuity.  Each of the Five Elements is in a sense a loving couple or pair of couples who take care of each other. The male or yang organs are in a protective circle around the female yin organs to shield them from the outside world of external energies.

Learn from Stephanie Mills our course instructor in this video about the Law of Five Elements, learning how energy flows around the body.

Click here to book one of our many courses running nationwide. 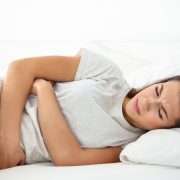 New training dates to be announced this Friday (21st November)

What Chewbacca Mom Taught me ….

Who’s responsible for our health?
0 replies

Want to join the discussion?
Feel free to contribute!

This site uses Akismet to reduce spam. Learn how your comment data is processed.